Thank you for your patience while we retrieve your images.

Visitors 204
Modified 31-Jan-21
Created 27-Aug-12
226 photos
An off duty Fire Captain (Dave Rousseau) and a local contractor rushed into this 4 story building to get people out as their building was quickly going up in flames. A woman jumped from her 3rd floor apartment to escape the intense smoke and fire and was transported to UMass in Worcester. Six others were taken to Health Alliance in Leominster. Three firefighters were injured - one whose head was burned when he took off his helmet to put on his mask, another whose legs were injured when a failed hydrant blew off its bolts and one for dehydration.

It was told that two women ran about a quarter of a mile to the Oak Hill Firehouse and told them there was fire coming from the house on Daniels St. First arriving companies arrived with heavy fire out the 3rd and 4th floors of the 4 story building. The initial attack was a defensive one then companies then made an interior attack but had to withdraw due to the heavy fire in the cockloft.

Mutual to the fire came from Leominster with 2 Engines and a Ladder, an Engine from Lunenburg and Westminster to the fire. 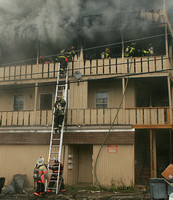